As many of you know, there is a byte community discord server. This server is supported by the byte staff & has over 2800 members. It was started almost a year ago by our forum mod Kaden. He has done a great job of building a successful server & dedicated team. Recently though, he passed ownership to me. We’re not going to talk about why he did it or the situation that happened not too long ago because this has nothing to do with that. My point in making this thread is to ask the community for ideas & suggestions that you’d like to see included on the server.

I already have my own ideas & ones I’ve seen floating around the community but I want everyones voice to be heard. I can’t promise that everything will be utilized, due to not everything working for everyone, but I can promise that your suggestion will at least be considered.

Some of you know that I’m soon moving to a different state, so I won’t be consistently active until about this time next month. I think it’ll be good though for this thread to marinate a bit, let users have a chance to contribute.

Anyway, leave your ideas & suggestions below! No restrictions as far as relevancy goes - as long as it has to do with the server, it’s fair game. I’m really looking forward to sprucing it up with what you guys suggest! tysm.

Check out the Byte Community community on Discord - hang out with 2,849 other members and enjoy free voice and text chat.

and i already put my suggestions in here:
https://community.byte.co/t/the-byte-discord-not-what-it-used-to-be/35646

there is a lot of discord servers. this is one of the two that i am apart of.

edit: it’s not the official one thanks @justinnovoa

This discord server is unofficial

So first, I think a few of the ones included by the community include “Starboard”, which @cark brought up, and the Hype channel back too. placeholder

Hype channel would be cool…

add a bot to the discord that messages the server with new topics made on the forum. 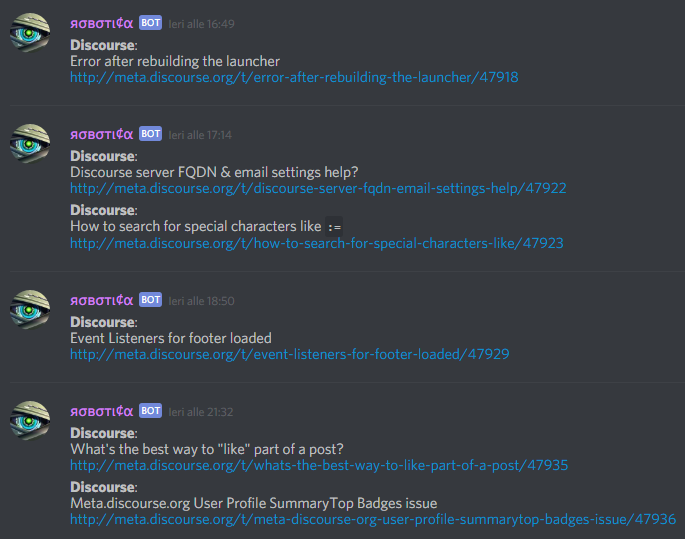 How to use Discord to display Discourse RSS feed

So you want visualize RSS feed from your Discourse forum to your Discord server. To do that you need a Discord Bot. You can use a hosted bot with an RSS cog and add it to your server or install a self-hosted bot and configure it. I prefer...

I upvote that idea too

I guess suggestions are needed. Whether or not they’ll do anything, depends on the how it’s done. (People wanted change but don’t know what change they wanted

:
-Starboard: (@cark’s idea)
-Hypeforbyte channel: (even if it’s a channel that serves one purpose, it was still a loved channel)
-Casino bot: (not really a needed thing but just for the lols and giggles; doesn’t even have to be casino bot but something for fun.)
-Podcast: (whether people like it or not, a podcast talking about the recent “events”, Cami’s announcements, and the future of byte would be sick. It would be better if it were ran by the owner, meaning Ash.)
-Lighter Expert Color: (@ShonziTho’s idea, it does strain the eye a bit and maybe a lighter color wouldn’t make it look like grape medicine.)
-A Byte Progress Channel: (Read-Only of course and have it under Dom’s tweets. A channel where the staff talks about the progress of how bytes doing so when people come and ask “hEY wHEnS ThE aPP rElEaSiNG?”, they would be directed to #byte’s-progress.
-The Discourse RSS Bot: (@ryanmccarley’s idea.)
-Update the Server(pretty much anything that needs an update.)**
-Fun Reaction Role’s: (Like many servers, including the Area 51 server, there were many mini roles that gave users an extra role for whatever it may be. Roles, in the byte discord, can consist of Youtuber role, Twitch Role, Snapchat Role, or something like that. Basically, a non-meta role.
-The Discord Itself: (Honestly, the server being “dead,” isn’t a major issue to me anymore. I felt like when the server started to divert into smaller sub-groups, things started to look iffy for the main byte discord. People start to form their small group of close friends, which is never a bad thing because making friends over the internet is sweet af but there really isn’t any reason the discord should be active anymore. I hope this doesn’t sound like a bash or an attack because I’m really not trying to make it sound like that and I’m trying to enjoy this bagel but my cat took a bite out of it and now I got to throw it away

. Understandably, I am a hypocrite for said divergence because of the servers I made where I took the active people and brought them into my own, which left the byte discord almost silent for a bit. I completely comprehend that the discord was made for the service and maybe the community but what’s a discord without its community. The byte discord is a good place for me because it’s where we all ready got close to and I love it very much! Basically what I’m saying is that, the best suggestion is to revive the server somehow.

Also, this is kinda off topic but congratulations on your new home @ash!

There needs to be a minecraft server for byte

For the love of god don’t add a casino

yup, what @AIexander said about my idea, ty alex

also we miss the hype channel

You know my suggestions, because it’s the same stuff we talked about for months. Only real suggestion to add is that the things get done, because you’re capable of doing them, and we all know you are. I know this is a really really busy time for you, but when you aren’t so busy, I know the ability you have to get things done, so honestly when the time comes I’d rather see you focus on the big changed everyone wants, than try to change every little detail.
Also my staff role still broke